Marriage is one of life’s most important milestones, with two people committing themselves to each other for better or worse. A happy marriage is based around communication, compromise and honesty. However, some marriages can break down over time, which is the case between Hank Pym and Janet Van Dyne. The relationship between Ant-Man and Wasp is one of the earliest established comic pairings, though they were unable to stay together. It begs the question as to whether Hank and Janet’s relationship could have been saved if they had got marriage counseling.

How did Ant-Man and Wasp meet?

Hank and Janet started out as colleagues who worked together closely. After Janet found out her father was murdered by an alien, she convinced Hank to help her avenge his death. She used Pym Particles and a biochemical procedure to change her size and grow wings. Ant-Man and Wasp worked together to stop the alien, with Wasp falling in love with her partner. But, Hank initially rejected her feelings due to the similarities between Janet and his first wife.

Eventually, Hank and Janet became an item, though Pym was still hesitant to commit to her fully. It was only after Hank created the Yellowjacket identity that their relationship moved forward. Suffering his first mental breakdown, Pym developed a new persona that kidnapped Janet. During this time, Janet married Yellowjacket, even though he was under the impression that he’d murdered Hank.

The situation got worse when Hank’s bipolarism caused him to be abusive to the other Avengers and his wife. This led to the infamous incident where Hank struck Janet. Wasp divorced her husband and it was years before the two of them found themselves on good terms again. 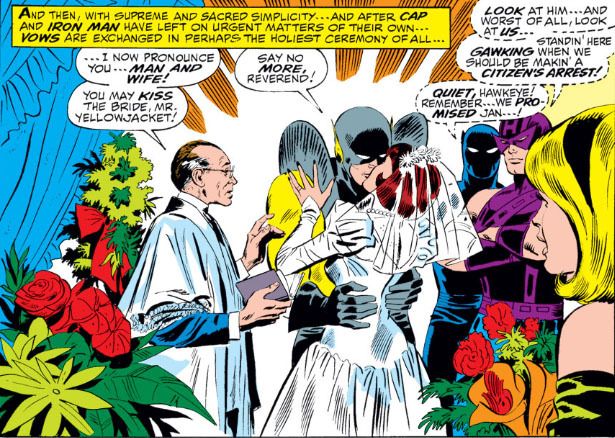 Janet came to forgive Hank eventually, and they even rekindled their romance. But, Wasp refused to marry him again, stating that it wouldn’t have worked. Their relationship ended again after Janet was presumed dead. When Wasp was found alive, she and Pym could never get back on the same page. This was exacerbated by Pym merging with Ultron.

Could marriage counseling have made a difference?

Marriage counseling is often seen as a last resort by many people. Couples may choose to go to counseling because there has been a breakdown of communication. Resentment and a lack of respect may be felt by both parties, leading to a dysfunctional relationship.

In the case of Hank and Janet’s marriage, therapy may have been an option in the early stages of their relationship. If Hank had known about his mental health disorders sooner then he and Janet could have addressed them together. He could have got separate therapy to work through his issues and marriage counseling could have happened later.

Marriage counseling isn’t mental health therapy and partners are responsible for voicing their own needs. Hank and Janet both made choices that negatively impacted their mutual happiness. Hank’s mental health became a barrier between them, which is a shame, because it didn’t have to be.

I believe marriage counseling could have been beneficial to Hank and Janet’s marriage. Whether it’s with a partner or not, therapy is a good way to work through problems.

One thought on “Could Ant-Man And Wasp’s Marriage Have Been Saved Through Counseling?”