The MCU has established itself as a rich universe with characters that are connected to each other. Each movie is designed to set up the next chapter and raise the stakes. But all the universe building can be overwhelming when it’s done too much. So, a self-contained film like Guardians Of The Galaxy Vol 2 is a refreshing change of pace. Here is my spoiler free review.

The film opens with the Guardians being hired by a race called the Sovereign to protect their special batteries. Fans who loved the first film will be pleased to hear the dynamic of the team is still intact. The Guardians can’t go five minutes without insulting each other, even when they’re fighting a giant monster. The same goes for Peter Quill, whose new-found fame has made him even more egotistical.

But it’s Rocket Racoon who gets the Guardians into trouble after he steals from the Sovereign. The team are chased across the galaxy and crash land on the nearest planet. A mysterious man called Ego shows up and claims to be Starlord’s father. Family is the main theme of the movie, with biological and adoptive relationships explored.

Chris Pratt brings the same charm from the original, showcasing Quill’s arrogance and vulnerability. He’s a man on a mission to discover himself and we see his struggle to choose between the family he found and the one he was born into.

Zoe Saldana gets her moment to shine as Gamora. She kicks plenty of ass and her relationship with the returning Nebula is explored. Nebula receives a lot of character development and you come to understand what has made her the way she is.

But the character who stands out the most is Drax. Dave Bautista gets to flex his comedy muscles as he provides the best lines in the film. Whether he’s laughing at Quill’s failed attempts to seduce Gamora, or coming up with his own version of a practical joke, Drax is a highlight. Rocket and Baby Groot make a great combination as well. 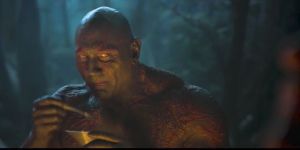