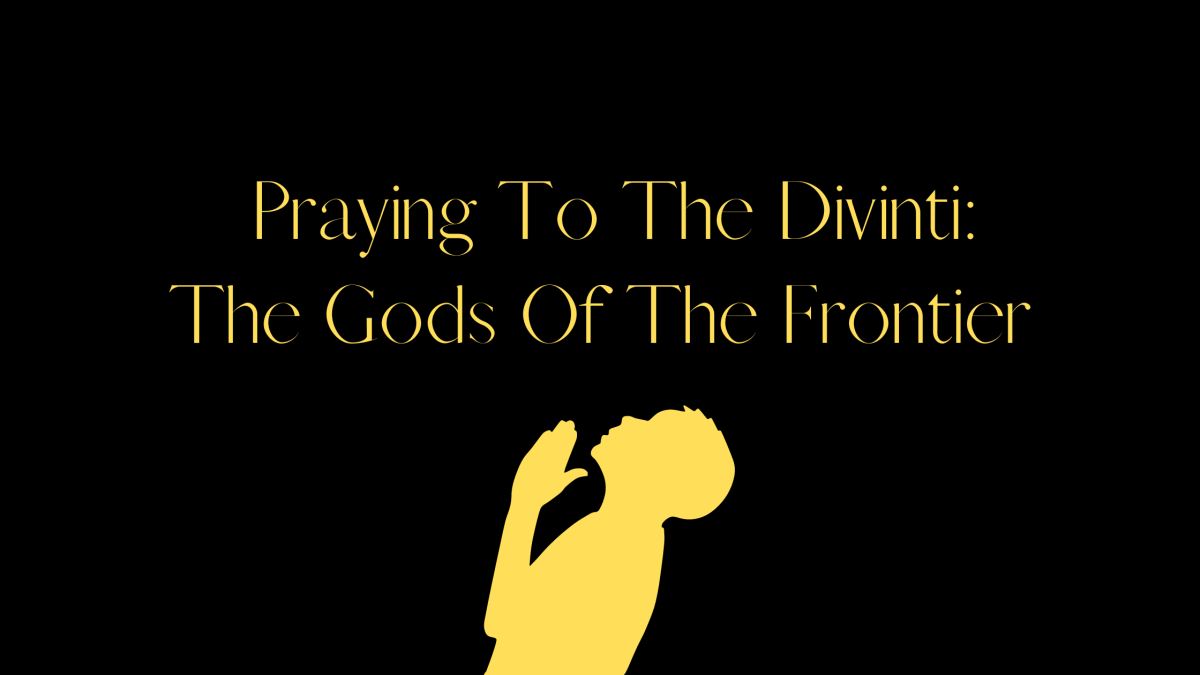 Religion on The Frontier is as vast and complex as the landscape itself, broken down into different belief systems and dogmas. When it comes to everyday frontiersmen and women, the dominant religion is polytheism and the belief in several gods known as the divinti.

Depending on the region, one of the divinti may hold more significance to the local population than others and here are all the major gods within the main Frontier pantheon:

The chief deity of the divinti, Agneius is the lord of the Underealm, the place where spirits are meant to travel to after they die and exist according to the virtues they lived by in life.

The dominant image of the Lord of the Underealm is that of a tall, dark-haired man with large fists for shaping and breaking whatever is in front of him. Agneius wears many faces and people evoke him for many reasons. To the main population, he’s a protector, a father and a source of strength against darkness. To the Questers, he’s a source of justice, war and punishment against the supernatural.

Depending on the stories, Agneius can be violent, forgiving, sly, just, capricious and cruel. Perhaps he is of all these things and more. A popular story among the Questers is that he’s locked in an eternal struggle with Tenebria, the goddess of the night and the main deity of witches.

The god of nature, Hob’s form is constantly shifting based on the animals that people most associate with him at any given moment. He could appear as a man with the wings of an eagle. A woman with the legs and tail of a cat and so on.

What’s always constant about Hob’s form is that he carries a large horn that is said to be blessed with the ability to provide an endless bounty of food and drink. He also sounds it at the beginning of any hunt and uses it to summon animals.

Hob has a particularly strong connection to hunters and in towns and villages that are close to forests and other woodland areas.

As the goddess of water, Sorani is worshipped in areas where water is found in abundance, including the sea and around lakes and rivers.

An unpredictable goddess, she is thought to be as changing as the sea. The forms she’s known to take are that of a pale, beautiful woman whose hair is made from seaweed, a woman with the body of a giant sea serpent or a great water bird with wings large enough to blot out the sun.

Sailors pray to her for safe voyage at sea and fishermen pray for a good bounty so they can do their work. She’s also held in the highest regard by the aquamancers of the Belson witch clan, who believe it’s their duty to defend the sea and Sorani’s children on their behalf.

A god that the average workman prays to, Malleus is the kind of deity that can be found above the hearth of many families across The Frontier.

The most popular image of Malleus is that of a burly man wearing a blacksmith’s apron with an endless amount of tools hanging from it and it’s said that he is responsible for crafting many divine weapons for Agneius and the other diviniti.

A god whose influence is felt across multiple stratas of society, Tulapian is a source of wisdom for doctors, artists, academics and politicians.

Dressed in a pure-white robe that is said to never spoil, country folk believe Tulapian travels The Frontier curing illnesses and mending the sick. For the dandys, debutantes and ministers of high society, Tulapian is a healer whose services must be bought and worshipped in the medical temples that have been set up in his name throughout different cities.

When a young woman wishes for her sweetheart to notice her or when an old man wishes for a sign that his departed wife is watching over him, they make an offering to Androlipe.

The personification of love, lust and fertility, Androlipe is said to take on multiple forms. To some, she’s an impossibly beautiful woman who comes in the night to deliver wonderful dreams. To others, he’s a handsome rogue whispering to give into the heart’s desire.

Perhaps no member of the divinti is more polarising than Tenebria. As goddess of the night and sky, she’s associated with the unknown, of a vast and primal fear that lives in the bones of all people who live on The Frontier.

Much of her infamous reputation is tied to her identity as the patron goddess of witches, a story that’s been told throughout the centuries and the popular story that she birthed and unleashed all the monsters that infest The Frontier.

All witches trace their heritage back to her, while the Questers believe she’s the sworn enemy of Agneius. Other stories tell of a time when she was the God of the Underealm’s lover and that they were both responsible for creating the world, until he cast her out to wander for trying to destroy the humans that he created in his own image.

Whatever the truth, it’s been lost to history and all that’s left are the stories that shape the world and the belief that people cling to.

The divinti form an important backdrop of AT THE DEAD OF DUSK, the second story to be published in the world of The Frontier. Order the novella today!