Addiction takes many forms. Some people chase the rush of drugs, while others numb themselves with alcohol. Traditionally, addiction is seen as an internal battle, but what happens when the source of someone’s fixation becomes a burden that they need to take on for the greater good? That is the case with Dane Whitman. In Frank Tieri’s Black Knight: The Fall of Dane Whitman, the titular character needs to confront his addiction in the shape of a mystical sword called The Ebony Blade.

A story about inner demons

Black Knight is one of my favourite lesser-known comic characters and Tieri does a great job of making him accessible to readers who might never have heard of him. Whitman’s journey to becoming a superhero is told within the first few pages, giving insight into his background as a regular guy who needed to step up and accept the curse of his family. As the keeper of the Ebony Blade, Whitman is slowly being driven mad.

On the run from The Avengers, Black Knight finds himself in a quasi-medieval realm called Weird World. After freeing the local populace from their oppressive rulers, Black Knight becomes the new lord, rechristening his kingdom New Avalon. Despite his good intentions, Whitman struggles to contain his addiction.

It isn’t long before The Avengers catch up with him and try to take him into custody. Believing they want to steal his sword; Black Knight retaliates by sending his armies to attack his former friends. The battle culminates in an emotional exchange between Dane and an elderly Captain America, who overpowers him.

“I know the road I face is not an easy one. This necessary addiction I’ve chosen may one day be my undoing. But not today. Today I am the ruler of a little piece of Weird World known as New Avalon. And that ain’t so bad.” – Black Knight

Isolated from the Ebony Blade, Black Knight begins to go through withdrawal. Eventually, Captain America succumbs to the influence of the sword, which motivates Dane’s forces to free him. Black Knight manages to snap Captain America out of his madness and convinces him to return the sword to his care. Dane’s reputation as a hero is restored. Even though the weight of his addiction continues to loom over him, Black Knight vows to lead New Avalon to a better future.

Swords and sorcery on acid

I thought the strongest part of the graphic novel was Black Knight’s characterisation. Tieri presents him as righteous, determined and self-aware. Dane’s downward spiral is captured in vivid detail, with his paranoia manifesting through the heated conversations he has with the ghost of his ancestor, Sir Percy.

I found the relationship between Dane and Captain America is to be interesting as well. Their dynamic flickered between respect, animosity and friendship. It was satisfying to see Cap acknowledge Black Knight as the only one who can wield The Ebony Blade successfully. 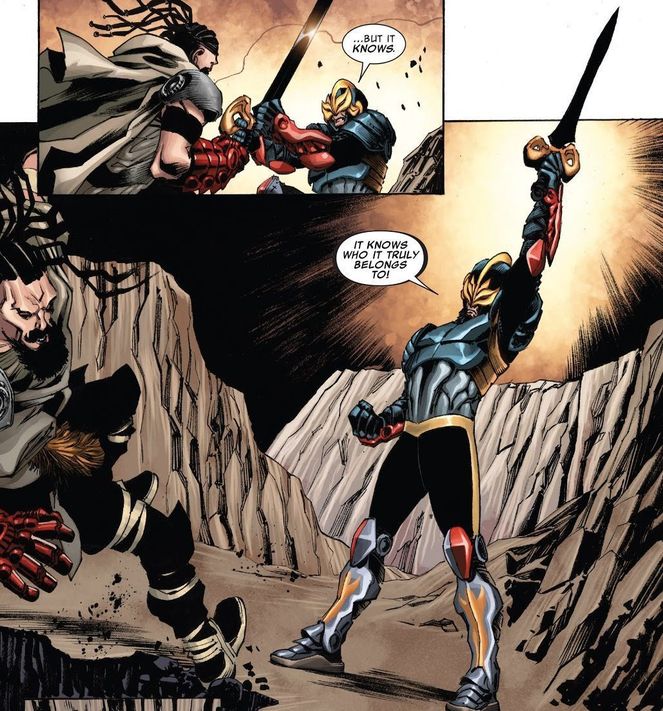 A cavalcade of artists, made up of Luca Pizzari, Kev Walker, Antonio Fabela and Andrew Crossley, created the landscape of Weird World. Every artist brought their own unique style to the graphic novel. The colourful characters and strange backdrops made me think of swords and sorcery on acid.

Black Knight: The Fall Of Dane Whitman is a memorable story that puts the spotlight on one of Marvel’s most underrated superheroes. Purchase it on Amazon now.

2 thoughts on “Black Knight: The Fall of Dane Whitman Review: A Hero’s Guide To Coping With Addiction”