Within the world of comics, it’s common for well-known superheroes to have a supporting cast. They are the characters who provide insight into the personal life of a superhero and what drives them on a human level. Wolverine’s supporting cast is made up of many intriguing characters and one of the few who’ve received genuine development is Amiko Kobayashi. The adoptive daughter of Wolverine, Amiko has evolved from a background figure into a multifaceted badass with her own unique path.

Amiko and Wolverine’s first meeting happened in the wake of a dragon attack on Tokyo. While helping citizens escape from the city, Wolverine came across a destroyed house, where he found a woman who was buried beneath the rubble. Although he tried his best to help her, Logan couldn’t free the woman. With her dying wish, she asked him to take care of her daughter, Akiko. Feeling honour-bound, Wolverine accepted.

Wolverine wanted to keep Akiko away from his dangerous lifestyle, so he left her in the care of his fiancé Mariko Yashida. Akiko grew up in Mariko’s care, living a comfortable life. After Mariko’s death, Akiko was placed in the Japanese foster care system and Logan sent money when he could.

Unbeknownst to Wolverine, Akiko was adopted by an abusive couple and the only way she could get through the experience was clinging to the idea of her saviour ‘Samurai Logan.’ During this period, Akiko began to develop a harder edge, changing her name to Amiko to reflect a more powerful and masculine mindset. 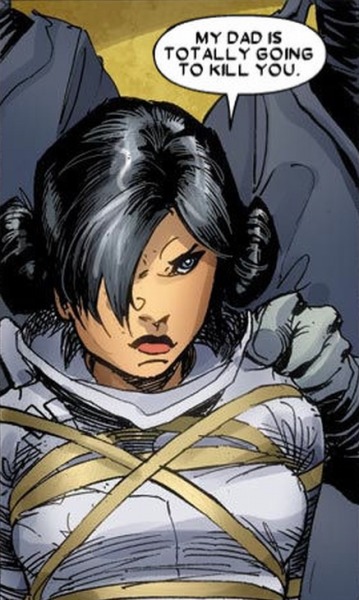 Eventually, Logan found out about his daughter’s plight and took her to a safer place. He left her in the care of his friends, Yukio and the original Silver Samurai. Under their tutelage, Amiko learned how to defend herself.

Over the years, Amiko grew into a strong and self-assured young woman. Her life changed when she met a woman named Mana Ianowa, High Priestess of the Shosei Clan. As the Mystical Guardian of Japan, Mana was responsible for keeping the country safe from demonic threats.

The High Priestess revealed that she and Amiko shared the same bloodline. Amiko’s lineage granted her magical abilities that she had yet to discover. Determined to live up to Wolverine’s example and wanting to make a difference in Japan, Amiko chose to be trained by Mana in preparation for becoming the future Mystical Guardian.

Despite her noble intentions, Amiko went through a period of recklessness. She started a relationship with the new Silver Samurai, Shin Harada, and stole from The Hand, which forced Wolverine to step in and rescue her from the cult. Realising Shin had put her in danger, Amiko broke off the relationship and rededicated herself to protecting Japan.

Amiko’s evolution from bystander to warrior is linked to her family relationships. From Wolverine, Amiko learned how to model herself as a good person. She idolised him in the same way a young samurai looked up to their master. But as she got older, Amiko came to see that her adoptive father wasn’t perfect. She didn’t seek his approval for every little detail. She matured enough to follow her own instincts and step out of his shadow.

Amiko also benefitted from having strong motherly figures in her life. She learned the importance of kindness from Mariko and the value of resilience from Yukio. Her relationship with Yukio is noteworthy because Amiko learned how to truly survive in a culture of violence without letting it ruin her enjoyment for life.

Few minor characters have received the level of development Amiko has. She moved beyond her passive role to become a prominent Asian superhero.

Wolverine has been a father to many young women. Find out how Jubilee and X-23 have benefited from his parenting skills.

One thought on “More Than A Supporting Character: The Evolution Of Amiko Kobayashi”