Two things I enjoy are comics and food, which is why I’ve combined my interests into Comic Kitchen. The series creates a three-course menu around a superhero and highlights unique dishes. African food features some of the most distinctive flavours in the world. It’s a special kind of cuisine that has a rich amount of heritage. A superhero who represents the strength of Africa is Storm. Dining at Blue Nile Café in Manchester inspired me to come up with a menu for her. Each dish packs a tremendous amount of flavour and tells the story of the former Queen of Wakanda.

Having grown up in Kenya, Storm would have been exposed to all kinds of African cuisine. Spice is an important part of many African meals, which is why I’d see her having a love for spicy food. Doro wat is an ideal starter for Storm. This traditional Ethiopian dish features spicy chicken that’s been marinated in different herbs. Infused with berbere spice, ginger, masala and other ingredients, doro wat has a strong kick. The Blue Nile version included a soft boiled egg and chicken thigh doused in rich sauce.

Storm would enjoy taking her time with the meal. She’d relish the zestyness of the doro wat, especially on a cold day. The simplicity would remind her of home, making doro wat her perfect comfort food.

Given her connection to nature, I’d see Storm having a balanced diet. Injera stew features a range of vegetables presented on Ethiopian flatbread. Made from teff flour, injera has a spongy texture and could be described as an African version of a crepe. Injera can be topped with all kinds of ingredients. The Blue Nile example came with yellow dahl, potato, chickpeas, rice and beetroot. The flavours merged together for a truly wholesome main course.

In traditional manner, Storm would eat the injera with her hands, dipping it in an African side dish like shiro. The chickpea strew would add an extra layer of spice. Every time she returns to Africa, I’d imagine Storm sitting down to eat injera with local villagers and townspeople. It’s the sort of food that should be enjoyed together. 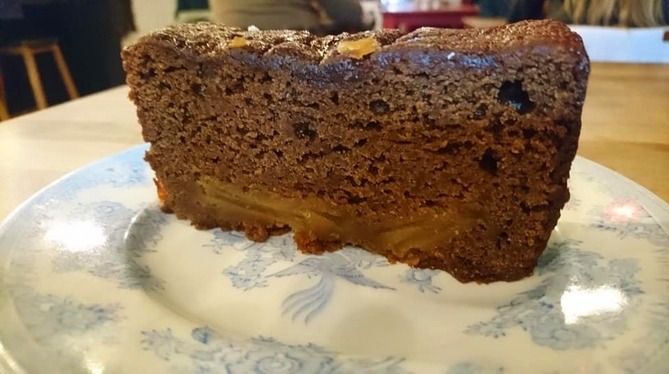 To finish off her three course meal, I’d picture Storm going with something light. This poached pear and ginger loaf from Teacup Kitchen ticks all the right boxes. The sweetness of the pear contrasts nicely with the zest of the ginger. The presence of the fruit gives the dessert a healthy quality as well. Storm might pair the loaf with a Kenyan coffee, as the drink would help to bring out the fruity flavour even more.

I’d like to thank Tiggi from Blue Nile Café for making some amazing food. If you’re ever in Manchester, then you should definitely head over to try the traditional Ethiopian dishes. Same goes for Teacup Kitchen. The desserts are brilliant!

Have you ever been curious about South African food? Check out the Comic Kitchen edition of Jubilile van Scotter and the Chakalaka menu!