Since it started in January, I’ve been following Saladin Ahmed’s Abbott series, which has continually impressed me with its subject matter and protagonist. Elena Abbott’s journalistic integrity combined with her status as a black woman has provided an interesting journey. Each issue has built momentum, showing elements of a supernatural threat lingering over Detroit. In Abbott #5, Elena finally confronts the demons of her past and future with explosive results.

The issue opens with Abbott tied up in the home of Bellecamp, a member of Detroit’s white upper class. He reveals himself as the source of the darkness plaguing the city. Through a mixture of black magic and blood sacrifice, Bellcamp seeks to return the world to an age of fear and myths. Bellcamp’s old world ideology clashes with the modern era of emerging technology. 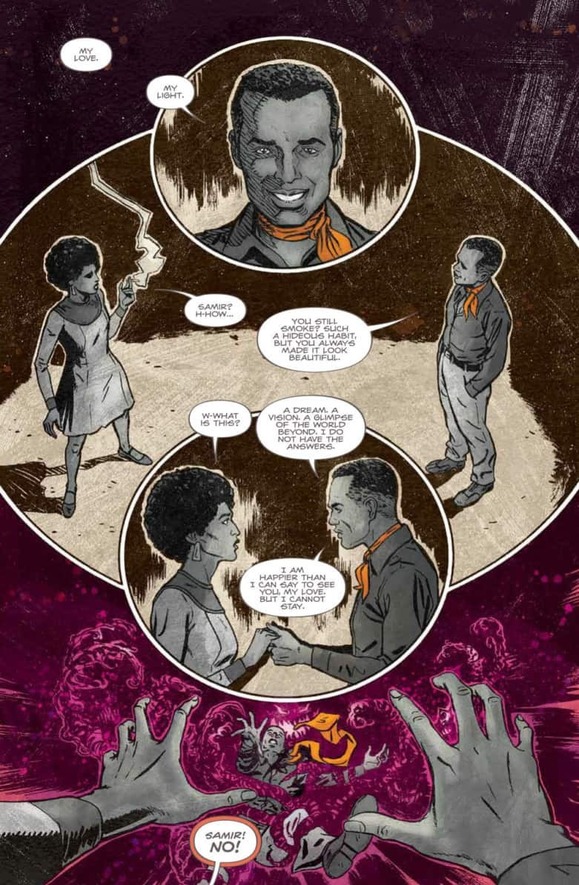 It’s one of many contrasts placed between him and Abbott. Class divide has been an ongoing theme in the series, with black people discriminated against within the 1970s setting. But Ahmed’s cast are characters of colour who fight back. They show their strength in a number of ways, such as Abbott’s former flame Amelia, cunning, capable and completely secure in her sexuality.

Bellcamp tries to force Abbott to serve him, but she manages to reason with Wardell, one of the captured souls within the manor. Breaking free, Abbott uses her influence as The Light Bringer to banish Bellcamp and release the souls he’d imprisoned.

After the battle, Abbott is reunited with the ghost of her husband Samir. Their reunion is beautifully captured, thanks to the stunning art of Sami Kivela. Sunlight trickles through the panels, highlighting a scene that resonates. Samir encourages Elena to move on with her life, to which she agrees.

In the following days, Abbott is praised for bringing attention to the murder of black people and making the world take notice. During a night with Amelia, Elena allows herself to love again, with the two of them embracing the future together. This showed some great character development, as Abbott had been afraid to accept her feelings for Amelia for fear of what others would think.

Abbott #5 ties all the narrative elements together for one hell of a final issue. Ahmed finishes his noir series in a satisfying way, offering readers a story that ticks every emotional box. Abbott’s hunt for the truth led her to a dark place, yet she never let go of her ideals. It’s a good lesson for journalists and writers to be reminded of: never stop believing in your work. Abbott is an ideal role model for anyone who wants to pursue a career in writing.

One thought on “Abbott #5 Review: A Satisfying, Supernatural Conclusion To An Exciting Series”