People go to see superhero films for a number of reasons. Some viewers connect with the characters, while others enjoy the huge set pieces and action-packed scenes. Some just want to laugh their asses off, which is where Deadpool 2 comes in. The first Deadpool set an extremely high standard with its meta humour, fourth wall breakage and zany leading character. All the tropes that people have come to love about superhero films were ripped apart and turned on their head. So, with expectations so high, does Ryan Reynolds manage to capture lightning in a bottle twice? Spoiler alert: It’s a resounding fuck yeah!

The film picks up with Wade Wilson balancing his life as a contract killer with wanting to settle down and start a family with his girlfriend Vanessa. The family theme plays a big role throughout the story, as Deadpool soon finds himself looking for a place to belong. This leads him into a team up with the X-Men, which brings back Colossus and Nega Sonic Teenage Warhead. Throw in a mission that involves a fired up teenage mutant and Deadpool has his opportunity to be a hero. Of course, Deadpool plays by his own rules and ends up on the wrong side of the law again as quickly as he puts on his X-men uniform. 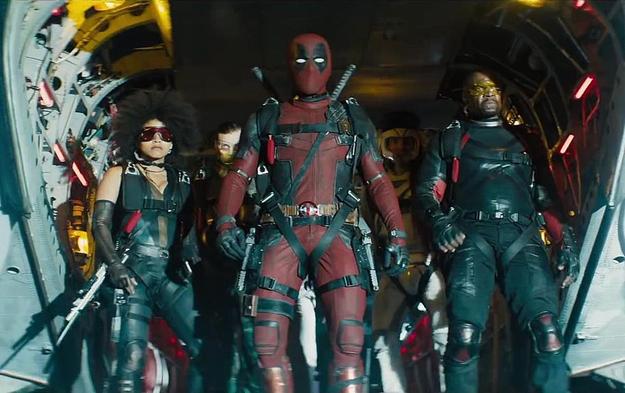 All protagonists need a foil and Deadpool’s arrives in the form of Josh Brolin’s Cable. Brolin injects his character with a no-nonsense determination that slams up against Deadpool’s irreverence for some of the best scenes in the film. Zazie Beetz as Domino is another highlight, playing it cool through all the mayhem around her as she proves why being lucky is the best superpower.

The comedy is Deadpool 2’s greatest strength, taking shots at everything from the dated sexism of the X-Men, to the heaviness of the DC Universe. The superhero parodies are shown in Deadpool’s decision to form his own team called X-Force. The team’s big set piece together is one of the funniest moments I’ve ever seen in a film. I was crying with laughter the whole time, even with all the violence and blood.

That’s where Reynolds’ acting really shines through. He puts it all into his performance to entertain viewers, inviting them to share in the chaos. But underneath all the black humour there’s an underlying message of family. All the characters in the film have lost something, which leads them down paths that are understandable. By the time the movie was over, it made me eager to see an X-Force spin off because of how well the cast played off each other.

Deadpool 2 takes everything that was good about the first and cranks it up to the next level with a fun story, hilarious references and an entertaining cast. Stick around for the post-credits scenes. You won’t be disappointed.

2 thoughts on “Deadpool 2 Review: The F Word Stands For Family In A Brilliant Sequel”

Sentient by Jeff Lemire is an epic comic series that asks the question of whether AI can truly develop emotional intelligence. With stunning art from @ghwalta and characters you can get behind, it's definitely worth reading and can be bought from @tkopresents. Full review in bio link. #comics #graphicnovel #scifi #ai #artificialintelligence
@tkopresents publish so many great comics and one of my favourite series so far is Pound For Pound by Natalie Chaidez. What happens when a one woman army goes on the warpath to find her sister? Utterly engrossing storytelling! Full review available in link in bio. #comics #graphicnovel #comics #indiecomics #tko #art #mma
Received a copy of legendary comic historian Bill Schelly's biography Sense Of Wonder and it's such a powerful book. Schelly talks openly about his struggle of coming out as gay during a difficult time in history and how comics transformed his mental health for the better. #comics #mentalhealth #mentalhealthawareness #bookstagram #books
John Constantine/Hellblazer inspired art found in Manchester. #comics #art #constantine #johnconstantine #gothic #gothicart
Had a blast speaking @heard_stories storytelling tonight in Manchester. Felt cathartic to tell a genuine story around the theme of hauntings and mental health. Was nice to win free tickets as well. Definitely worth coming to for any storytellers. #storytelling #publicspeaking #mentalhealthawareness #manchester #anxiety #mentalhealth