In the modern day, mental health is an important issue, with people becoming more comfortable talking about it. But there are many who still struggling with their disorders or feel afraid to talk about it for fear of being judged. This feeling is common among young men, which is why The Comic Vault advocates mental health positivity. A male character who reflects feelings of inadequacy and guilt is Speedball. His struggle to overcome his mental health issues is a poignant journey that deserves to be looked at it more detail. 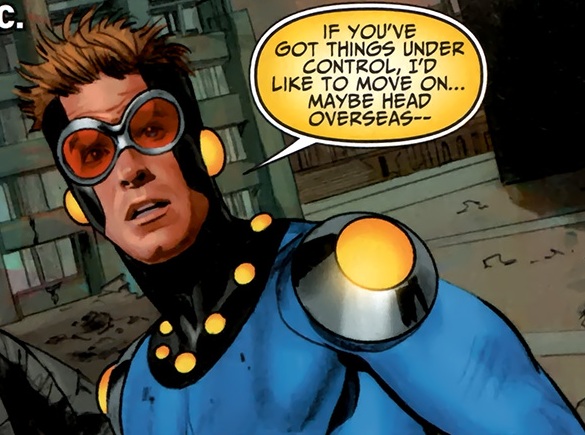 After a lab accident, Robbie Baldwin gained the ability to generate a kinetic energy field that protected him from impact. This manifested in bubbles that he could use to ‘bounce’ and use as concussive weapons. Taking the name Speedball, Baldwin balanced his superhero career with high school life. At home, Baldwin had to deal with a mother and father who had marital problems, which caused domestic stress. As a district attorney, Baldwin’s father had a dim view of vigilantes. It put further pressure on Speedball because he couldn’t share his identity with his parents or feel like he could talk to them.

Speedball was able to find friendship with the New Warriors, a team of young heroes. During this time, Baldwin gained confidence and learned to better control his powers. The darkest part of Baldwin’s life occurred during Civil War, when the New Warriors were filming for a reality TV show in Stamford, Conneticut. They captured a group of supervillains, only for a criminal called Nitro to explode and kill 612 people, including 60 children and the New Warriors. Speedball was the only survivor, but the trauma severely affected his mental health.

Feeling guilty and full of self-loathing, Baldwin took on the new identity of Penance. This involved him wearing a suit that contained 612 spikes for all the lives lost in Stamford. The spikes pierced Baldwin, causing him intense pain, but also stimulated his powers.

Penance is an allegory for self-harm, as Baldwin deliberately hurt himself because of his mental health issues. His guilt caused a mental block with his powers, which made him feel as if the only way he could make up for the deaths was to ‘sacrifice’ the joy in his life. This mentality can also be connected to suicide because people who choose to do it feel they’re sacrificing themselves for the benefit of their loved ones. 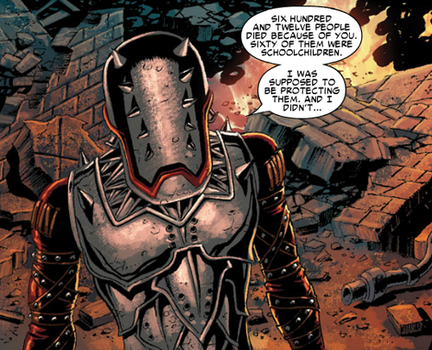 As Penance, Baldwin’s powers became more explosive in nature and he became reliant on the suit to activate them. Even after Baldwin returned to the Speedball identity, he admitted that he cut himself because he’d got used to the coping mechanism. Fellow mental health sufferer, Hank Pym, offered to help him find a better way to activate his powers. This is an encouraging example of how people who suffer with similar disorders can benefit from talking to each other. Eventually, the New Warriors reformed, with Speedball being able to regain his sense of self-worth.

Speedball’s story can be applied to young men all over the world who’ve suffered from feelings of low self-worth. I can certainly empathise with the character because I’ve felt a similar way, but having the right kind of people to talk to makes a hell of a difference. The road to inner peace is full of stops and starts. Remembering the progress you’ve made it so important, which is why I encourage anyone with mental health disorders to be open with people you trust.