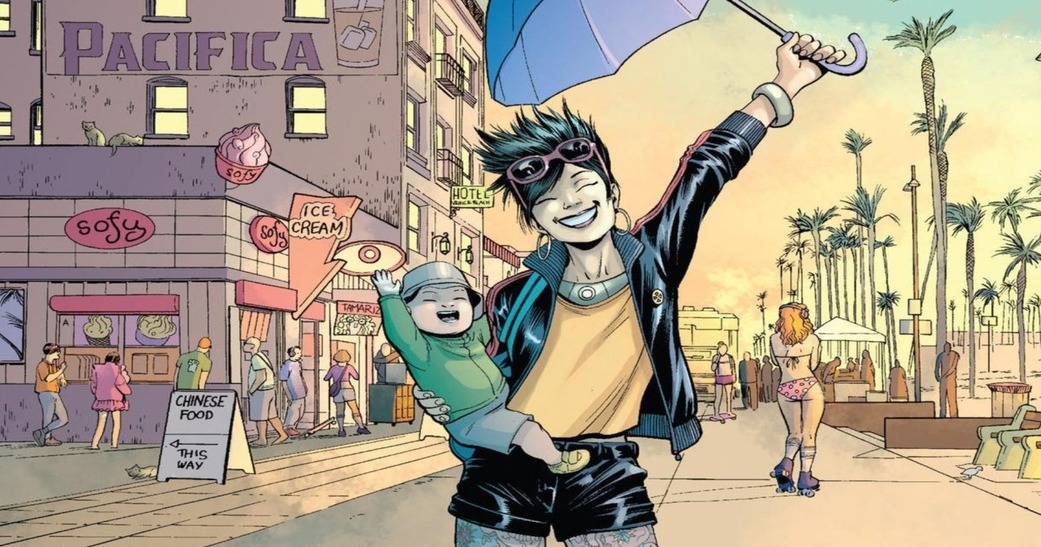 The X-Men feature a variety of diverse characters and I think what makes them so popular is how they’ve been allowed to grow over the years. A lot of the characters started off as a children and readers have followed them into adulthood. One of the most developed X-Men is Jubilee, who evolved from Wolverine’s sidekick into a strong-willed mother. Even by X-Men standards, Jubilee has been put through a lot, though it’s enabled her to mature and find her place in the world. The Comic Vault is looking into her history to understand what makes her a great role model for young mothers.

Born to two wealthy Chinese immigrants, Jubilation ‘Jubilee’ Lee lived in Beverly Hills. She displayed gymnastic talent from a young age and it was believed she could one day participate in the Olympic Games. But Jubilee’s world was destroyed when her parents were murdered by hitmen. Jubilee was sent to an orphanage, only to run away and survive on the streets. This would have been traumatic for a young girl, but Jubilee managed to make the most of her situation. It showed her inner strength to be able to cope with such horrible circumstances.

Jubilee hid in Hollywood Mall, where her powers first manifested. The stress of escaping from mall security caused her to emit a dazzling light that allowed her to get away. Jubilee realised she could use her powers to entertain people and make money.  The mall security hired mutant hunters to capture her, but Jubilee was rescued by the X-Men. Even after they help her, Jubilee remains fearful and takes to borrowing clothes from several members to create a costume for herself.

Jubilee met Wolverine for the first time when he was being tortured by the Reavers. Despite her terror, Jubilee refused to let Wolverine suffer and helped him escape. She managed to nurse him back to health and this forged a father and daughter bond between them. Jubilee joined Wolverine on several missions and she became a permanent member of the X-Men.

Jubilee also joined a team of teenage mutants called Generation X alongside Husk, Synch, M, Skin, Chamber, Penance, Mondo and Gaia. As part of Generation X, Jubilee learned to control her powers and acted as a mentor to her teammates because of her experience with the X-Men. During her time with Generation X, Jubilee battled against the team’s greatest foe, Emplate. She was responsible for defeating him because when he tried to siphon her powers, she used her natural sarcasm to infuriate the villain. This created a nemesis-like relationship between the pair.

During the events of M-Day, Jubilee lost her powers with so many other mutants. This would have been like losing a piece of herself, but Jubilee didn’t let it stop her from being a hero. She joined the New Warriors as Wondra, wearing a technological suit that gave her super strength. It was at this time that Jubilee started to mature into a more serious person and she eventually left the New Warriors to rejoin the X-Men.

The next major shift in Jubilee’s life occurred when she was turned into a vampire by Dracula’s son, Xarus and used against the X-Men. Battling against her new found bloodlust was the hardest fight of her life, yet Jubilee got the help she needed from her friends. While she was managing her condition, Jubilee rescued an orphaned baby and named him Shogo. She likely remembered what she had to face growing up and didn’t want the boy to grow up without a family. Jubilee officially adopted Shogo and became his mother. Jubilee’s efforts as a mother pay off as Shogo is revealed to be a future member of the X-Men.

Jubilee is a wonderful depiction of a young mother because she made the choice to look after a child that wasn’t her own. Her experiences with the X-Men gave her the maturity to become a parent and it signifies her own journey coming full circle. She came from a rich family, lost everything and wanted to give her son a better life. It goes to show that adoption is an important avenue of parenthood and shouldn’t be overlooked. Jubilee is an integral member of the X-Men and her journey is reflected in many young people today.

Jubilee isn’t the only Asian superheroine that’s worth looking into. Check out 6 Awesome Asian Superheroines that you need to know about.