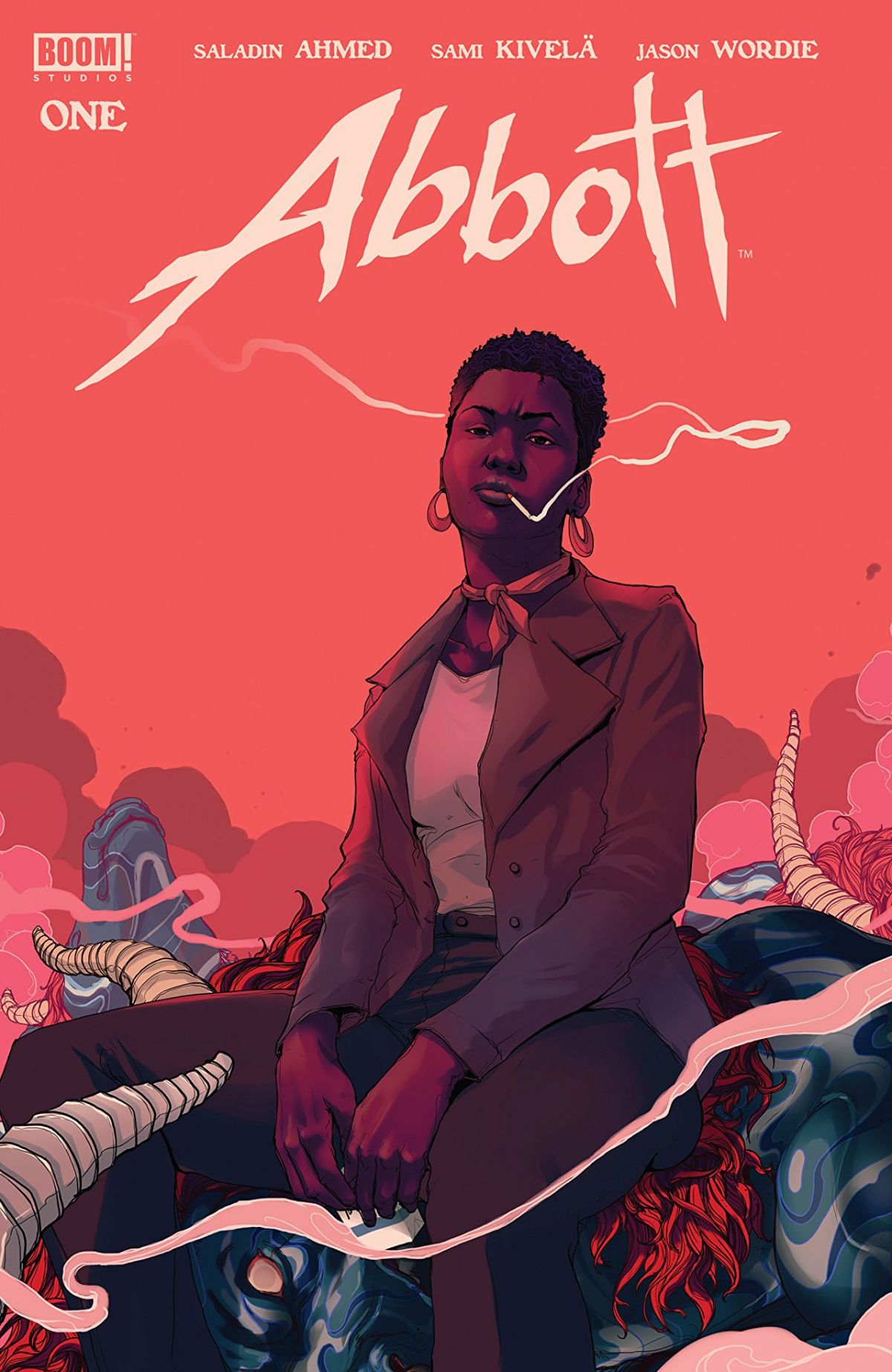 The 1970s were a time of great cultural upheaval, from the Vietnam war, to the rise of disco. The decade provides fertile storytelling ground for Abbott #1, written by Saladin Ahmed. The comic features strong-willed reporter Elena Abbott investigating a case that forces her to confront her past. As a black woman in 1970s Detroit, Abbott faces a hotbed of racism and political change that tests her resolve and Ahmed makes sure she’s up for the challenge.

Before I get into the story, the setting of the comic is one of the most unique I’ve come across recently. Detroit during the 1970s was a time of great change, a kind of “black renaissance” as Ahmed writes in the back of the comic. The Black Panthers Party was gaining momentum and the city was gripped by tension. After the 1967 rebellion, black people faced hostility on a regular basis and Abbott immerses you in an environment of political paranoia. The backdrop provides Ahmed an opportunity to develop his character and showcase her strengths. 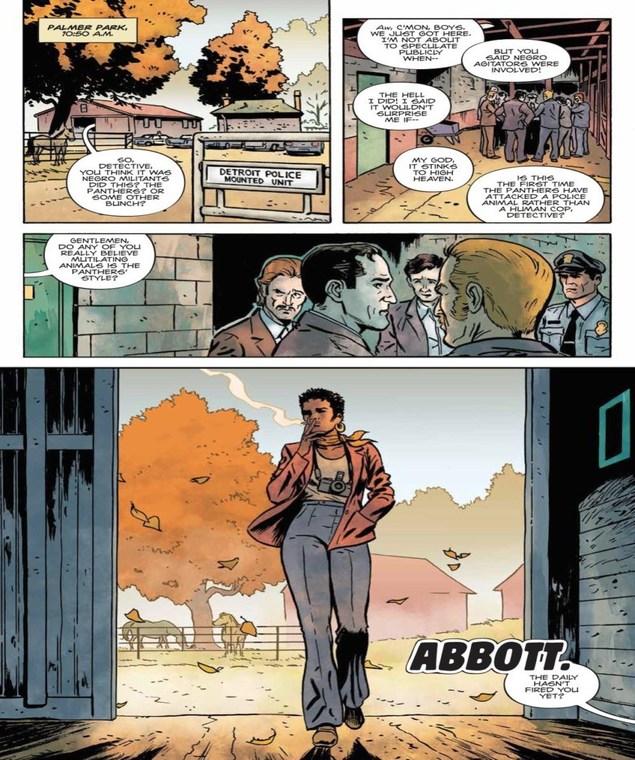 Abbott looks into a violent murder that involves a decapitated police horse. Initially, it’s believed “negro agitators” are to blame, a rumour Abbott is keen to disprove. She writes what she believes to be the truth, which puts her at odds with the mainly white readership of the Detroit Daily. As the only black woman on staff, Abbott needs to prove herself even more. The racial tension is shown in a scene where two board members are openly racist and Abbott’s boss kicks them out of his office. The social divide permeates every page and Abbott navigates Detroit with a take no prisoners attitude.

The investigation becomes personal for Abbott when it reminds her of her husband’s death, hinting at a supernatural theme. The melding of crime and horror makes for an intriguing set up. But, even if the comic remained in the noir category it would still be worth reading. 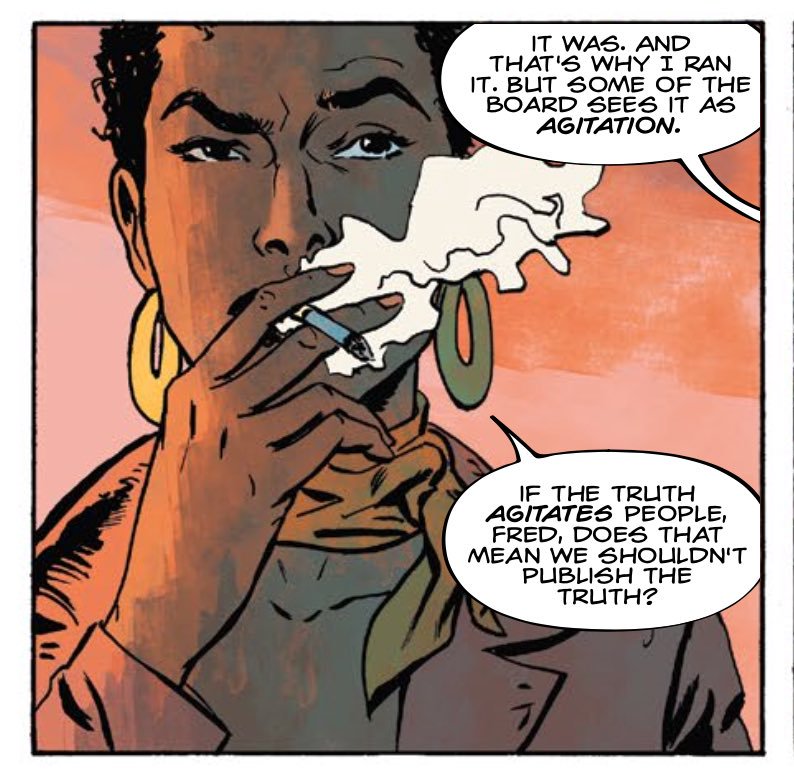 As a character, Abbott is fully-fleshed out, making it feel as if she’s been around for years. Her integrity and determination is contrasted with a smoking and drinking habit. Abbott’s journalistic tenacity is reminiscent of Lois Lane and Ahmed throws in a fun reference to show the similarities between the two of them. It’s to his credit that he’s developed such a strong character within a short amount of time.

The art is handled by Sami Kivela and the colour is done by Jason Wordie. The duo have created a gorgeous comic, with a thriving, seedy cityscape. Abbott has a dynamic appearance, with her confidence portrayed through body language. In her first appearance, she swaggers onto the scene smoking a cigarette, ready to take on a disgruntled group of police officers. She’s also given softer moments, such as when she’s thinking back to her husband’s death and you can see the anguish on her face.

Abbott #1 is an impressive first issue that takes you into the heart of the Motor City at a time when America was on the brink of change. Abbott is one of the most exciting POC protagonists to be introduced in a long time and you’ll want to see where her journey leads. The series is running for five issues and it’s available in all comics book stores now.

To get a taste of Ahmed’s writing, be sure to read The Comic Vault’s review of Black Bolt: Hard Time to see how talented he is.