In comics, there are various realities, with the main Marvel Universe being called Earth 616. Superheroes from the main reality are the best known, but there are plenty of underrated characters from other dimensions who deserve to be recognised as well. Nocturne is a good example. Hailing from a reality outside of Earth 616, Talia ‘TJ’ Wagner is the daughter of Nightcrawler and Scarlet Witch. She’s one of the most prominent X-Men in her dimension and has found herself in the prime Marvel Universe.

The formation of the X-Men was different in Nocturne’s reality. She grew up in the care of Nightcrawler, while her mother remined with the Avengers. While under the control of The Shadow King, Wolverine killed Professor X and Logan was left a cripple. Jean Grey died shortly afterwards and Cyclops left the X-Men, bitter at Wolverine’s actions. Logan and Nightcrawler became leaders of the Xavier Institute and TJ joined the X-Men when she’s seventeen. Nocturne was responsible for saving Wolverine from a vengeful Cyclops by using her powers to move Logan’s paralysed arms and impale Cyclops.

After her twentieth birthday, Nocturne was taken by the Timebroker in order to fix her broken reality and the problems of other universes. She joined the Exiles, a team of reality hopping superheroes who were trying to save their respective homes. During this time, TJ entered into a relationship with John Proudstar and becomes pregnant. Unfortunately, Proudstar was badly wounded and Nocturne miscarried. Despite the trauma she faced, Nocturne was able to continue to be an active member of the Exiles and overcame her tragedy. This demonstrated her resolve and inner strength. 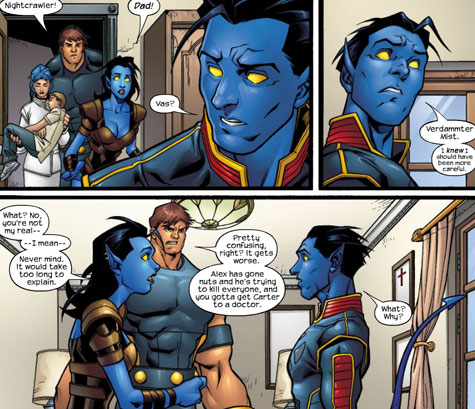 Eventually, the Exiles arrived in the main Marvel Universe and teamed up with the X-Men. Nocturne met the 616 Nightcrawler and they developed a strong bond. Nocturne stayed behind in the 616 reality and went on various missions, which included her infiltrating the Brotherhood of Evil Mutants and joining the New Excalibur team.

During her time with New Excalibur, Nocturne had a stroke. Although she pulled through, she suffered from memory loss, aphasias and hemiparesis. Again, Nocturne demonstrated her strength by fighting to regain her motor skills and memory. She’s a good role model for anyone who’s suffered from a stroke and needed to find a way to get their life back on track.

Nocturne has the same appearance as Nightcrawler, though her powers are different. While she can’t teleport, she has the ability to ‘jump into’ another person’s body for up to 12 hours. This gives her control of a person and allows her to command their body. She can also fire ‘hex bolt’s that are made up of the same energy from the dimension that Nightcrawler uses to teleport through. TJ has a degree of telepathy that hasn’t been explored as much as it could.

Nocturne is an example of a legacy character who doesn’t need to be from the main Marvel Universe to be compelling. Her outsider status makes her unique and I’d enjoy seeing her featured in future X-Men related stories. She has a lot of unlocked potential that if used in the right way, could make her a leading figure for the next generation of X-Men.