The Comic Vault is pleased to present another cosplayer interview, featuring Beatrice Yuen, also known as Freyeplays. She’s combined her passion for fitness with her love of modelling and cosplaying. I asked her about how she works her cosplaying into her modelling endeavours and it was great to hear her thoughts on how cosplaying can benefit mental health.

Can you tell TCV’s readers what you do while you’re not cosplaying?

I have a BFA in graphic design and spend my work days as a UI designer for UnitedHealthcare. To summarize my job, I create front-end web layouts for hospital administratives that look up insurance claims. When I’m not cosplaying, I’m usually strength training at the gym or booking unpaid modelling photoshoots (mostly trade/time for photos, also known as “tfp”). To be honest, the strength training and modelling shoots take up the majority of my free time and I tend to con-crunch a lot.

How did you get into cosplaying and was it inspired by any of your modelling?

Oh man, digging deep here. I got into cosplaying back in high school when I met my two best friends. They introduced me to a squad of honours roll nerds that founded the anime club our freshman year. My friends were constantly buying manga volumes and lending them out to me, and my manga and anime addiction became pretty rampant back then. Death Note was just being released back in 2007, and I decided on L as my first cosplay.

The remaining photos are somewhere in the vaults and I’m terrified to go look. The squad set out on Halloween as a Death Note group and I had a blast, although the neighbours didn’t think we were dressed up and that sucked. Overall, it was my first time wearing makeup at the ripe age of 17 (smudged eyeliner ftw) and the appeal of dressing up hadn’t quite kicked in yet. I didn’t start modelling until January 2017, so none of this was influenced by my modelling career. Not yet.

What was your first cosplay experience?

In 2008, my high school friends somehow managed to drag me to Youmacon with them even after we had graduated. It was my very first convention, and the three of us cosplayed as Cheongsam/Qipao Sakura, Ino, and Hinata (from Naruto). They sewed my Hinata cosplay as a late birthday present. My virgin eyes were opened to so many possibilities after experiencing Youmacon for the first time. At the time, the convention was still on the smaller side but there were some amazing cosplayers and guest speakers that attended. Unfortunately, I was still very shy and awkward and our trio didn’t get many pictures of us taken. Check out my babyface!

I didn’t find the spark until Youmacon 2015. I ended up drifting away from my love of manga and anime while I was studying for my bachelors degree in college. After struggling with my mental health for about a year, I finally graduated with my BFA in graphic design the winter of 2014. Since my last convention, I had made a new group of friends in college and they encouraged me to join in their Pokemon gijinka group. It was a last-minute decision and I toiled away to create my cosplay during the remaining month before the convention. I bought the dress and accessories, but I ended up patterning and sewing (both by machine and by hand) the cowl/cloak for my Togepi gijinka cosplay. I was absolutely terrified because I had never designed my own pattern before, and I hadn’t used a sewing machine in 14 years.

I was pretty O.C.D. about how the cowl draped in the front, as well as the functionality of the hood. I also sewed the red and blue shapes to the skirt by hand with near-invisible stitches. After taking a step back, I realized that I truly enjoyed the experience of crafting my own costume (even just part of it) and this convinced me to start cosplaying a lot more seriously.

I noticed you’ve cosplayed as Black Cat. What was your reason for choosing her and does the character have any meaning to you?

I decided to cosplay as Black Cat because I believed her character design was a good introduction to a more serious approach to cosplay. She’s also a character that is recognizable to a wider demographic (older and younger attendees, comic book fanatics and casual superhero fans). I really wanted to be someone most people could pick out almost immediately so I could challenge myself with the costume quality. There is a broad spectrum of Black Cat cosplays online, ranging from casual to store-bought to custom-made latex. I wanted to be somewhere in the middle, but stay true to the original costume designs.

When I was younger, I loved sitting on the floor pouring over art books in Borders and Barnes & Noble. Black Cat was one of the stronger female characters that had a substantial backstory, was always kicking ass, and had a sexy but tasteful design I felt comfortable sporting in public. I really think I nailed it by choosing her, and I enjoyed cosplaying as her so much more than I expected. 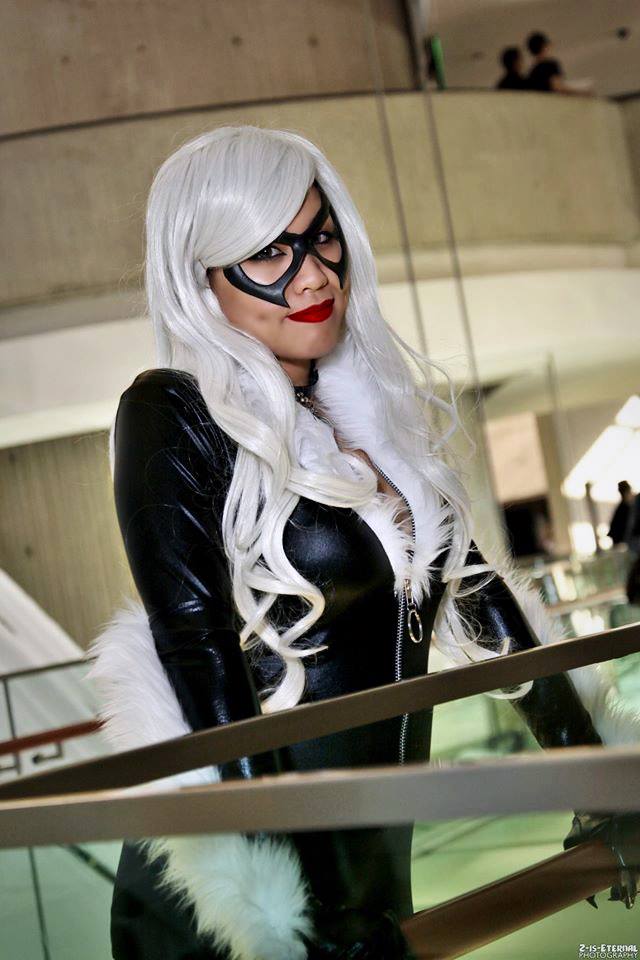 Who was one of your favourite characters to cosplay recently?

Black Cat was hands-down my favourite to cosplay. Being tastefully sexy and somewhat incognito is a blast!

You’ve mentioned you’re passionate about fitness. Do you feel that has helped make you a more confident cosplayer?

For sure! It’s also helped me develop confidence when I model. I love knowing that the hard work I put into my body is paying off, and I’m proud to be able to share that with people! On the other hand, cosplaying and modelling pictures keep me incredibly accountable at the gym because I have hundreds and hundreds of photos that, in a way, document my progress and reflect my efforts up to that point. If I’m not on top of my diet before a photoshoot, it shows. If I wanted to be further along with my physique, it shows. I’m encouraged to push myself harder for the next photoshoot or live event by assessing my body constantly. The challenge is maintaining my mental health so I’m never beating myself up internally when something isn’t going according to plan.

What are your thoughts on the positive effects cosplay has on mental health?

To start off, cosplay has gotten extremely popular and that popularity has resulted in a large group of people who project negative attitudes towards other cosplayers. I really want to stress that people usually start cosplaying to have fun, exercise their creativity in a unique way (building things, roleplaying, creating clever crossovers, etc), and  socialize with like-minded individuals who are equally as awkward and nerdy. Never forget why you started. Don’t let those negative people bring you down because you should be cosplaying for yourself. You have no obligation to please them or fulfil any standards/rules they try to set.

Back to the question, I am a huge advocate for mental health. Having struggled with my own mental stability during college, I empathise with anyone who also struggles to cope on a daily basis. I started strength training at the gym in order to stabilize my emotions and anchor myself. It very well may be the reason why I’m still alive today, as gruesome as that sounds. It’s true. But fitness is not something that appeals to everyone, I totally get it. That being said, I strongly believe cosplay is a gift.

Cosplay is something that anyone can do, no matter who they are, where they come from, how old they are. Cosplay is timeless and magical; it allows us to enter a reality where we leave our true selves behind to become whoever we choose to be. It allows us to escape our inner demons temporarily– liberating us from our fears. It allows us to take risks and try new things. It encourages us to connect with complete strangers, drop all judgments, and disregard stereotypes.

In addition to the immediate gratification of seeing a project through to its fruition, cosplay teaches us that it’s okay to make mistakes because we’ll eventually get it right in the end with enough tries. That’s basically how living life works. How awesome is that? By being such an inclusive activity, cosplay is a natural emotional anchor for those who need to escape their problems, those who are seeking emotional support from others, and those who need an activity to keep their minds occupied (crafting things is extremely therapeutic). It’s why I love convincing people to get started; it literally changes their lives for the better!

Do you make your costumes from scratch?

Due to time constraints, I make parts of my costumes from scratch and modify the remaining store-bought parts. Eventually, my goal is to make the majority of my costumes myself — I just juggle so many hobbies outside of my 9-to-5 job that I can’t realistically learn all the necessary skillsets in the first place.

Is cosplay just a hobby for you right now, or could you see yourself trying to make money out of it one day?

Cosplay is currently just a hobby right now but if my following grows enough, I would definitely try to make money out of it in the future! It all just depends on how much support my followers on social media are willing to give me! Right now, I am just focused on improving my craft and making tons of new friends at conventions (and busting ass in the gym)!

Do you have any helpful advice for someone who’d like to get into cosplay or modelling?

Don’t let anyone tell you that you can’t or shouldn’t do it. If you want to get into cosplaying and/or modelling, just go for it! People will tell you that you’re too short, too tall, too skinny, too chubby, too slutty, too prude, the wrong ethnicity, too ugly, too crippled. People are fucking mean. You are NEVER going to make everyone happy, so your goal from the very start is to make sure YOU are happy. Have confidence in yourself and your choices. If you believe cosplaying and modelling will make you happy and help you grow as a person, you shouldn’t let others keep you from personal growth and exploration.

Who do you plan to cosplay as next?

Please follow my Instagram (@freyeplays) and my Facebook page (@freyeplays) for updates on my cosplay progress for my line-up, as well as tons of modelling photos from my various photoshoots throughout the year! Thanks for reading this far guys, I really appreciate you taking the time to get to know me! Best wishes to those who are currently working on their own cosplays right now! I’d love to see pictures and progress, so don’t hesitate to message me on either social media platforms. 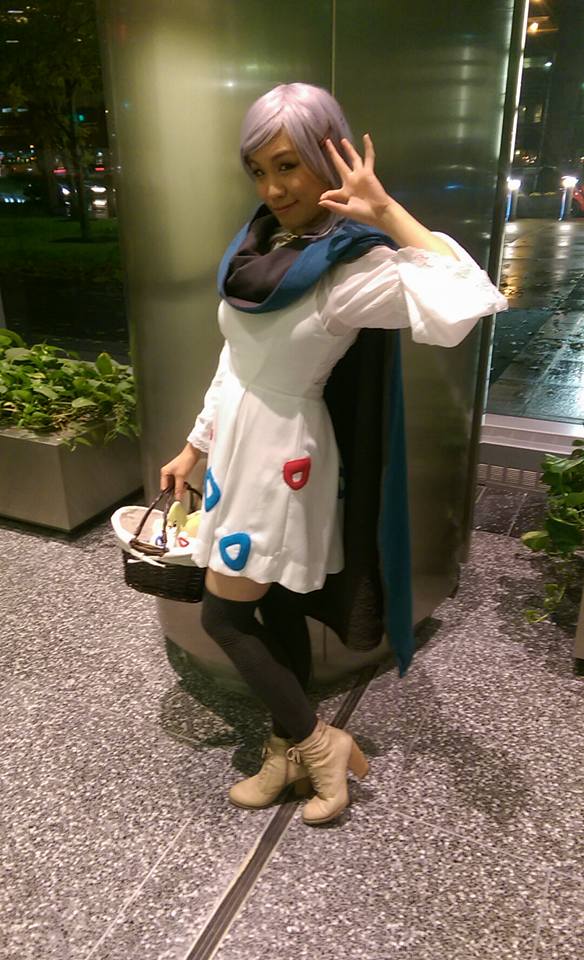 Beatrice Yuen, AKA Freyeplays is a passionate cosplayer and fitness enthusiast. You can follow her on her Instagram and Facebook to see more of her photos.

One thought on “Cosplayer Interview: Freyeplays”