Cosplaying is an amazing way to bring together people who appreciate pop culture. It allows you to become one of your favourite characters and step out of your comfort zone. The Comic Vault is pleased to present an interview with Soylent Cosplay, AKA Jennifer Pryer, who’s making a name for herself in the cosplay world.

I appreciate you taking part in the interview Jen. For the readers at TCV can you give them some background on what you do when you’re not cosplaying?

When I’m not cosplaying, I’m usually either studying for my SFX makeup course or just hanging out at home playing video games.

How did you discover cosplay and was it something you wanted to be involved with from the start?

I discovered cosplay back in 2009 I think when a friend and I decided to make costumes for one of our school projects. We wore the costumes to a convention and it was so fun! It was such a positive experience, but I unfortunately kdidn’t live in a city that held these conventions and none of my friends at the time really wanted to do it again, so I stopped. It wasn’t until I met my partner in 2011 that I tried it again properly. I bought a costume, chucked it on and went to a convention in Sydney. From that point I was hooked. We go to that same convention every year, but, you know, in (hopefully) better costumes haha!

Is there a big cosplay scene in Australia or do you think there’s more room for it to grow?

It’s definitely grown a lot since I first started. The conventions I use to go to were quite small and sometimes held in cramped spaces. The more recent ones have gotten so big! We’ve gotten our own PAX recently, which is by far my favourite convention of the year, so I think Australia is putting itself on the map now. I’m excited to see how it grows.

You’ve done some great cosplay work as Liara from the Mass Effect series. Why did you choose to cosplay her and does the character mean anything to you?

Thank you! The Mass Effect series in general means a lot to me. I’d never been so immersed in a game universe before and all the characters were so interesting and well written. Liara in particular really intrigued me as a character; she was so naive and cute in the first game, and you watch her grow through out the series into a pretty impressive badass. I guess she was just a feel good character for me and I really cared about her, and more than that I saw a bit of me in her, so I thought “maybe I’ll give this a shot and see what happens.” Plus, I have a soft spot for alien girls.

Aside from Liara, what character have you enjoyed cosplaying as in recent memory?

I recently did a custom outfit for Darth Talon that I wore this year to a convention in the Gold Coast and it was honestly amazing. Darth Talon always makes me feel really cool. The lekku (or head tentacle things) of the Twi’lek are really recognisable to any Star Wars fan, and having a lightsaber means kids want to run up and have a Jedi vs Sith saber battle with you. It’s probably one of the most entertaining costumes I have.

Do you make your costumes by hand?

Yes. When I was starting out, I bought a couple of costumes to test the waters a bit, but once I knew it was something I really enjoyed, I switched over to making my costumes myself. My first few felt apart within the first few hours, but I learnt so much! There really is no better feeling than putting your handmade costume on, looking in the mirror and feeling that pride that you created something that is uniquely yours.

Well that is, until you realise that you didn’t think about how you were going to go to the bathroom in it!

Have you ever been able to make money out of cosplaying, or is it something you do for a hobby?

I haven’t, but it really would be a dream for me. I really do love cosplaying and creating characters, so if one day I could make money from it, it would be amazing. For now it’s a hobby, but a fantastic hobby that I share with hundreds of other amazing people. 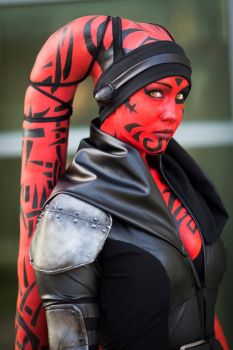 Do you believe cosplay has positive effects on mental health?

Definitely! There’s so much camaraderie that comes with being a cosplayer, especially when you start planning groups and having crafting days together. Just the fact that you are around others that appreciate your work and understand your passion creates such a positive environment. And sometimes being able to act like another person/ alien/ creature for a while really helps you blow off steam.

Have you been able to travel outside of your home country and cosplay, and what has the reaction been from other people?

Haven’t travelled out of Australia yet for cosplay, but hopefully soon I’ll be able to! I’d love to go to some conventions in the States – they all look so amazing.

And the reaction to my cosplay? Overwhelmingly positive! I was really scared when I first started that my work wasn’t good enough that that people might think I’m too weird, but I’m was pleasantly surprised when the opposite happened! My weirdness brought me into the community and most people seem to like what I do. I’m very lucky that I’m surrounded by so much positivity.

What would be your best advice for someone who’s just starting out in the cosplay world?

Just get out there and experience it first hand. It’s so easy to get overwhelmed when you see all these other amazing cosplayers doing these crazy good things (at least that’s what happened to me) but once you’re at the conventions, surrounded by the people, you realise that everyone’s just a bunch of nerds in costumes. Oh! And pick a character from something you love, because the gratification you get from finding others that love the same thing, or are cosplaying from the same thing, is second to none!

Which character do you plan to cosplay next?

I’m planning on cosplaying Symmetra from Overwatch at the end of the year, as well as doing another outfit for Ciri from The Witcher 3.

Jennifer Pryer AKA Soylent Cosplay is an Australian cosplayer.  She focuses on cosplaying  sci-fi and fantasy characters. You can follow her on Instagram and Facebook to see more of her awesome costumes.