For this Beneath The Pages segment, I’m putting the spotlight on Native American graphic designer, Jeffrey Veregge. Veregge has created art for Marvel, Valiant and IDW, injecting his unique flair into comic covers. A member of the Port Gamble S’Klallam Tribe, Veregge is also of Suquamish and Duwamish tribal descent. His art style can be linked to his heritage, and here’s what makes it so appealing. 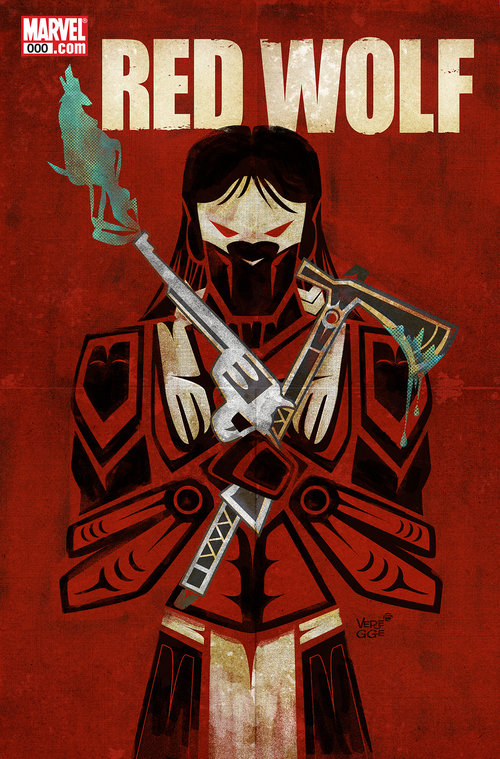 when reading the Red Wolf: Man Out Of Time graphic novel. The cover is eye-catching, with Red Wolf’s body made up of tribal style lines. He holds a smoking pistol and tomahawk in his hands, creating a duality that fits the character. The mix of red and black makes the image look like an ancient drawing on a cave wall. Veregge’s cover is the reason I chose to turn the page and found that Red Wolf is one of the best characters I’ve discovered recently. It highlights the importance of a comic cover and how skilled an artist needs to be to grab the reader’s attention.

Veregge has also created beautiful variant covers for Batman and Superman. He used circles and squares to piece together Batman’s body and made his cape look like the feathers of a bird. He employed a similar technique with the Superman cover, presenting the Man of Steel on a blue background to show him soaring through the sky.

Veregge’s art may be influenced by his time studying with the Tsimshian master carver David Boxley. He learned basic Salish form-line design, which has a minimalistic and straight forward approach.

What I appreciate most about Veregge’s art is that he’s introduced a unique style into the comic industry. It combines historical themes and a modern touch. Veregge is a skilled artist who deserves plenty of recognition.