Sons of Anarchy earned a reputation for being a violent show that depicted anti-heroic characters you couldn’t help but be fascinated by. The comic series is no different. Sons of Anarchy: Volume 4 is written by Ed Brisson and drawn by Matias Bergara. It reads like a short story collection, with four separate stories focusing on four different Sons.

The first story is about Jax tracking down a thief who stole his mum’s SUV. He comes face to face with an ex-member of the club called Kyle Hobart, who made an appearance during Season 1. Jax threatens Kyle until it’s revealed that his son was responsible for stealing the car. Kyle’s son pulls a gun on Jax and screams that the club was responsible for tearing his family apart.

Other members of SAMCRO break them apart and Jax decides to spare Kyle and his son. Jax tells Kyle he wants them out of Charming and if they ever come back he’ll kill them him. The story is a strong showcase of Jax balancing the violence in his heart with the good man he’s trying to be.

The second story is about Juice helping out his business partner Vince with a blackmailing problem. Vince claims his ex-boyfriend Evan is going to leak a sex tape if he doesn’t give him money and Juice investigates. After a violent car chase, Juice is about to kill Evan when he tells Juice that Vince stole money from him and he’s been trying to get it back.

Juice finds police reports confirming Evan’s story and he cuts ties with Vince by forcing him to sell his share of the business. Juice gives Evan most of his money back and keeps some for himself. It’s a good reminder that although Juice has done the right thing, he’s still an outlaw.

The third story takes place in Vegas and focuses on Bobby doing his Elvis impersonation. The bar owner convinces him to show three wealthy business men a good time in exchange for a cut of the money they spend. Bobby takes them on a wild night in Vegas and in the morning he finds out they’ve stolen his kutte. 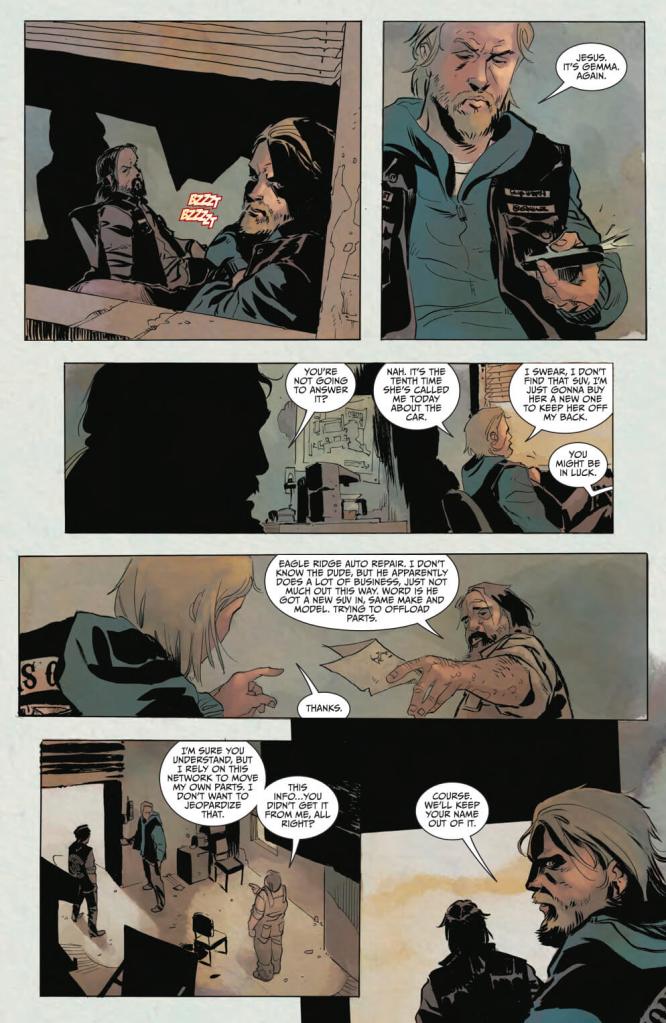 Bobby tracks them down with the help of an elderly bar tender called Edith and they get his kutte back. It’s a funny story that shows two older characters having the chance to be badass.

The final story is an origin of Happy and how he came to be a member of SAMCRO. He’s a drug dealer trying to get enough money to pay for his mum’s medical bills. A local gang are giving him trouble and he’s eventually sent to prison. Inside he meets a young Tig who plans on prospecting for SAMCRO when he gets out.

When Happy is released he runs into the gang again while out shopping with his mother. They insult her and Happy finally snaps. He picks up an axe and kills the leader brutally. The final panel is of Happy receiving his first smiley face tattoos to represent the people he’s killed.

All the stories provide a window into the motivation of each character. Brisson understands each SAMCRO member. He knows what makes them tick and doesn’t shy away from showing them at their bloodiest. He also shows their better nature, from Jax refusing to murder a boy, to Happy doing whatever it takes to look after his mother.

Bergara’s art is fantastic, with pulpy panels and moody colours. The world of Sons of Anarchy is a bloody one and the art reflects its subject matter.

Sons of Anarchy: Volume 4 is available on Amazon.

One thought on “Sons Of Anarchy: Volume 4 Review”